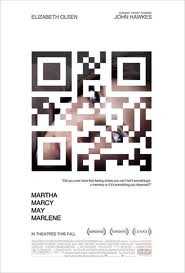 I guess it was inevitable that a marketing vehicle as interesting and potentially power as QR codes has made its way into most marketing departments, especially in the entertainment industry where they cater to a young tech-savvy demographic. But the folks at Fox Searchlight are taking this to a whole new level.

Fox Searchlight is placing QR codes in traditional promotional materials for the studio’s upcoming film “Martha Marcy May Marlene,” a film starring Elizabeth Olsen, the younger sister of Mary-Kate and Ashley Olsen. The film is about a young woman who has difficulty reconnecting with her family after fleeing a cult. It debuted at the Sundance Film Festival in January, where director Sean Durkin won the U.S. Directing Award in the Dramatic category.

Such acclaim could catapult a project into an indie film hit, so is it wise to experiment with such an untested marketing ploy?

It’s one thing to use them as a supplement to advertising materials, but that’s not what makes this story intriguing. Fox Searchlight is exclusively releasing the movie’s trailers via QR code, a first in the industry.

It’s doubtful such a bold move would be made with a movie studio’s big budget A-list vehicles. A cutting edge experiment such as this is a little more palatable when it’s experimented on an art house project. You can still see the trailer sans QR code simply by going to a website.

It’s an interesting concept that is most likely going to stay more supplemental than exclusive in a movie’s or any other product’s marketing arsenal. For one, QR codes are only accessed by a limited section of the public. As we reported a few weeks ago, it’s estimated that 14 million Americans scanned QR codes in July. Secondly, there are reports of technical problems from people who tried to access this trailer via the QR code. Too many stumbling blocks to get traction.