Happy New Year, everyone! It’s an especially new year for me: For the first time in 24 years, I’m spending January somewhere other than The Columbian newspaper. 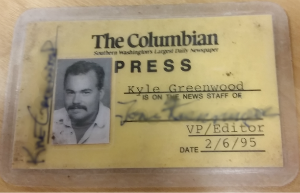 It was quite a run. I had ups, downs, successes, and defeats, although most of the time I hovered right in the middle. I’ve been with Webfor for all of six months. If I drank coffee, I’ve barely been here long enough to enjoy a cup.

Some colleagues expressed surprise that I would make such a change at this point in my life. I’m approaching 50. I’m married with children (two daughters). And yet I was leaving an established company with more than a 120-year history to start over with an agency that’s been around for a tenth of the time!

It could have been anywhere, really. It was just time to go.

I’ll miss the holiday potluck (newspaper people love eating by the way), free parking, and seeing familiar faces no matter where I was in the building. Being there for so long, I was kind of a resident expert on a variety of systems, processes, and personalities.

At Webfor, all of that cache was gone. It was so weird. The first days and weeks were filled with paperwork, training videos, and reading up on the ways of Webfor. Professionally, I was learning more. Socially, I was the new kid at school.

Nearly 20 years ago, I was part of a Columbian panel talking about journalism to local high schoolers. I was there to answer questions about how to write for the “internet,” because it was an up-and-coming media.

I always remembered that advice. At The Columbian, I worked the halls like a two-bit comic at the local Yuk Factory. At Webfor, I kept my head down, resisted with the jokes (even if I had a PERFECT zinger for a nearby conversation), and took in all the different personalities. You would have hardly known I was there.

That advice also shapes my work as a content writer at Webfor. When I started my journalism career, I covered high school football, college soccer, and even a dart tournament or two. I doubt the circles on that particular Venn diagram get within five feet of each other.

While the subjects may be different, the process didn’t change. Tracking down the whos and the whats and the wheres happened no matter what event I was covering.

The same can be said about content writing at Webfor. During any given month, I could be working with roofers and riggers, plumbers and pump fitters, or Alaskan charters and architects. All with different voices, tones, and — you guessed it — audiences.

Back at the Office

After a few weeks, I finally put my head up. A particularly outspoken fellow made some crack and, purely on reflex, I fired back a VERY witty rejoinder. It felt like everyone stopped and stared at me. After three minutes (I think) of silence, he said, “Hey … I like this guy!”

Soon enough, I started actually doing work, interacting with everyone else, and eased into my position. I found out who gave as good as they got, who were the fantasy football nerds, and who was always down for happy hour. And I discovered they were all insanely smart, talented, and just itching to help each other out.

After a month, I felt comfortable enough to play my favorite Pandora channel over the company speakers. I finally felt like I was home.

After about ten minutes, a seemingly annoyed person asked aloud, “Who the hell is playing Billy Joel music?!”

Maybe not all the way home yet. Still, I’m pretty confident I made the right move.